The Best Places to Travel in May

When the 20th-century naturalist Edwin Way Teale noted that "all things seem possible in May," he wasn't kidding. Picture pilgrimage towns temporarily — and intentionally — filled with snakes. Or secret valleys carpeted in roses. Oh, and there's that $2500 cocktail. Read on for the specifics, and countless other reasons to experience what Teale would call "the world's favourite season."

You don't need to travel all the way to Amsterdam to see tulips in bloom. Since 1953, Ottawa has celebrated the blossoming of local tulips with a festival that has grown to be among the biggest in the world. The tradition started when Princess Juliana of the Netherlands presented Ottawa with 100,000 tulip bulbs in appreciation for the safe haven offered to exiled Dutch royalty and the role Canadian troops played in the liberation of the Netherlands during World War II. The Canadian Tulip Festival preserves the memorable role of the Canadian troops as well as commemorates the birth of Dutch Princess Margriet in Ottawa during World War II — the only royal ever born in Canada. The festival runs from May 13-23, 2022 at various venues throughout Ottawa. 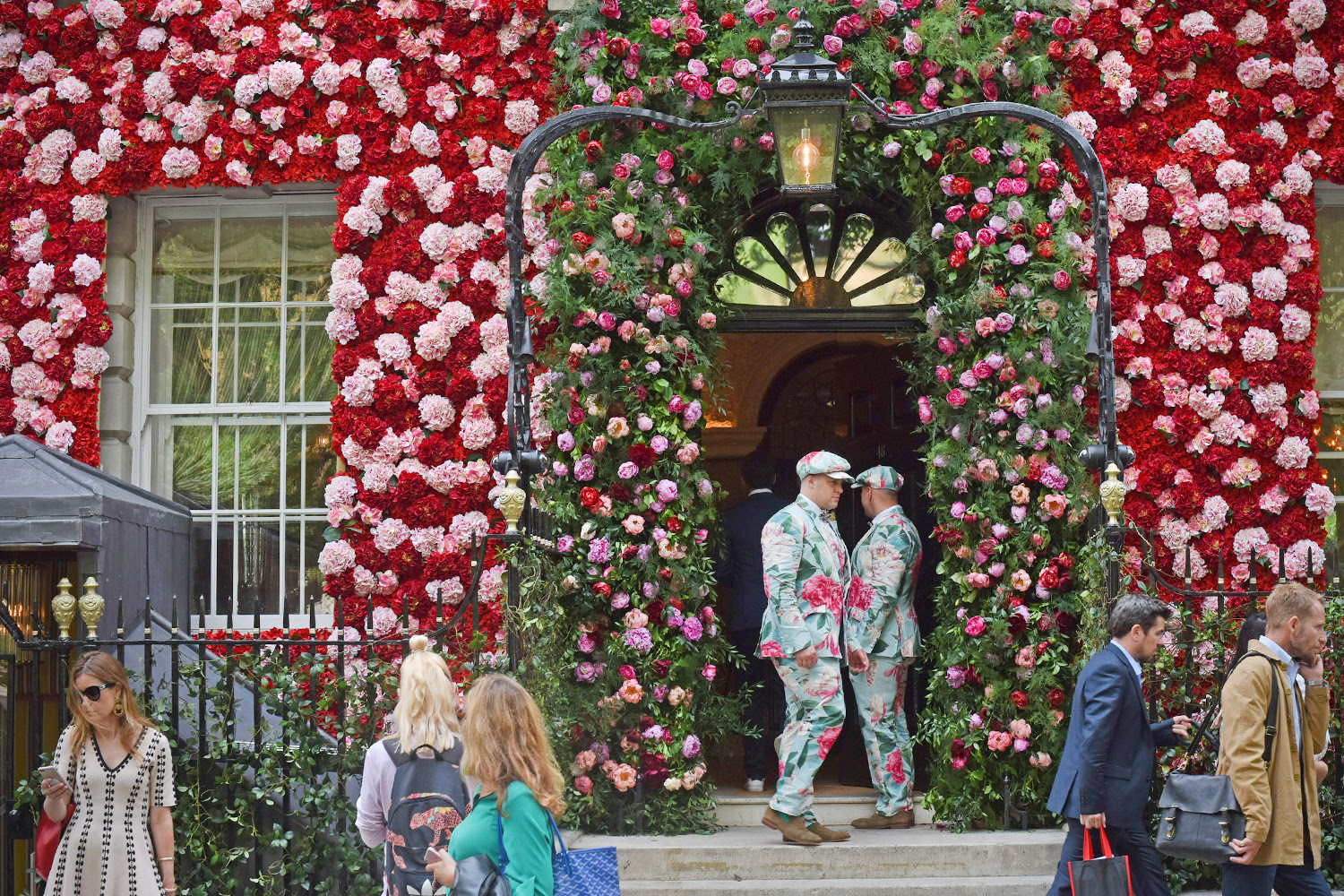 London comes alive in May, thanks in no small part to the Royal Horticultural Society's annual Chelsea Flower Show (May 24-28), where you'll find the likes of competitive gardening (top designers will spare no effort in their quest for the gold); more than 80 floral exhibitors in the fabled Great Pavilion (all going for Best in Show); and an over-the-top display by the National Association of Flower Arrangement Societies in celebration of the organization's 60th anniversary this year. If you're in town a bit earlier, play spot-the-Queen at the vastly pomp-and-circumstance-y State Opening of Parliament procession mid-May. (She’s the one with the gold-topped carriage). Back in the 1930s, when she was still sharpening her monarchy skills, Elizabeth II learned to dance in the lavish ballroom of The Mandarin Oriental London. The hotel had a major refurb, including a reboot of the resident Michelin-starred restaurant, Dinner by Heston Blumenthal. Order the ribeye with mushroom ketchup and triple-cooked chips to pre-fortify for another mid-May pleasure: London Wine Fair (moved to June 7-9 for 2022). 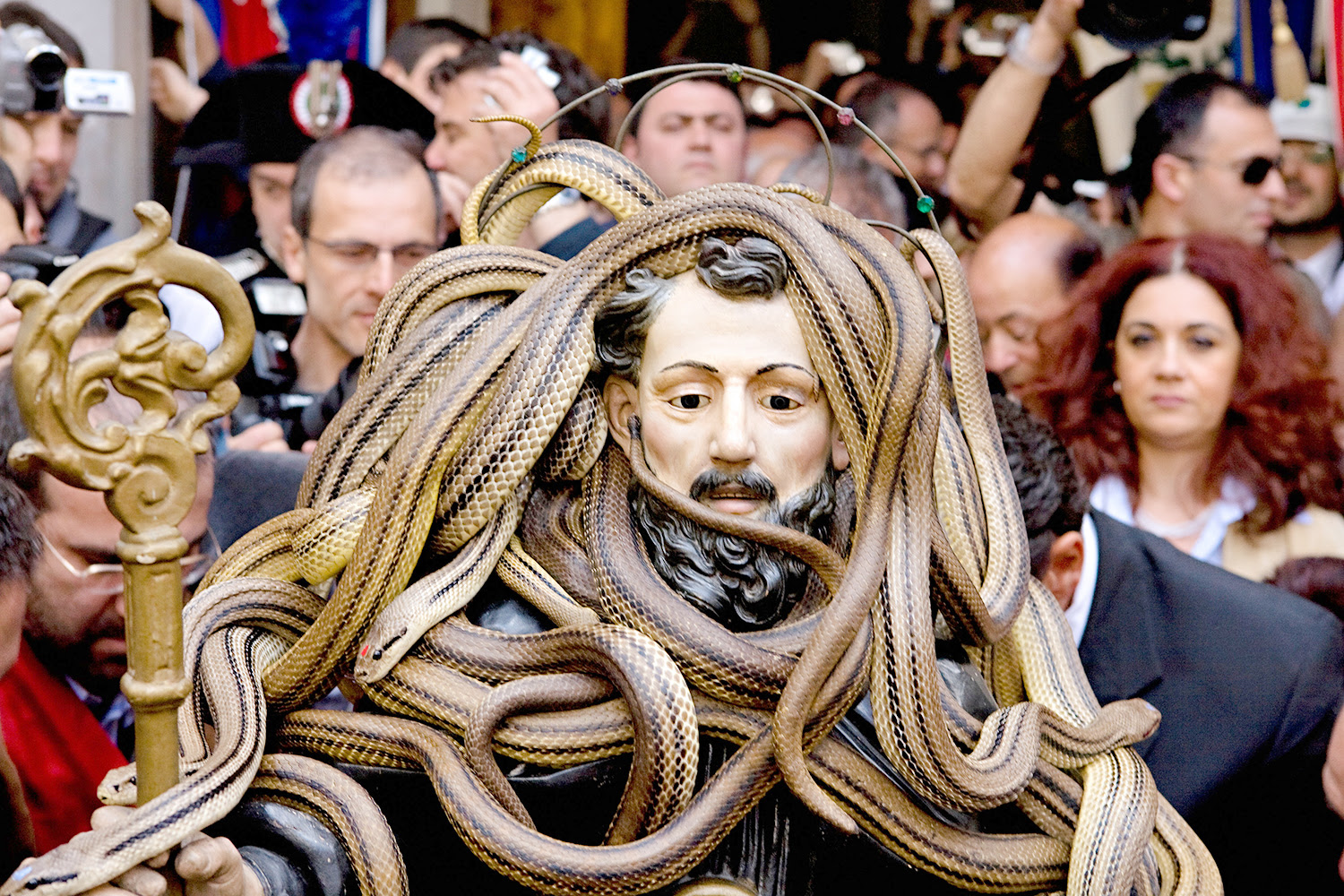 May is an ideal month to explore this stunning mountainous region: The weather is consistently balmy (ideal for day trips to hilltop castles) and the lineup of local, ancient festivals is the slithering embodiment of unique. See: the May 1 Feast of San Domenico and the Serpari in the tiny village of Cocullo, where the patron saint’s statue is covered in dozens of (nonvenomous) snakes, then paraded through the winding, cobbled streets.) For something less...reptilian, head to gorgeous Bucchianico for the Feast of Banderisi (Sunday before May 23), when crowds in period costume take to the medieval town center with massive bouquets of paper flowers. After the parade, eat wood-fired pizza on the outside terrace of Il Gatto e la Volpe. Or push the boat out with a candle-lit dinner at Reale: a monastery-turned-Michelin-starred-restaurant, near Abruzzo National Park, where you should try the ravioli with almond and mushroom infusion. Or if you're in the area on the last Sunday of the month, head to Rocca di Mezzo for the town's Narcissus Festival. Nope, not a celebration of the selfie-obsessed, but a day of folk dancing and parading — complete with daffodil-decked floats — to celebrate spring.

Sure, people hit the Kentucky Derby (May 7) to watch the race. But they're also there to rock their best hats, eat burgoo (an iconic spicy meat stew) and drink about 120,000 mint juleps. If not just any julep will do, go for the limited-edition $1000 variety — or hey, the $2500 upgrade in the gold cup —e ither of which you should pre-order online from Woodford Reserve for pickup at Churchill Downs. (Yes, you get to keep the cup, and the John Asher Memorial Scholarship Fund at Western Kentucky University gets to keep the net proceeds.) And if that's not enough bourbon for you, continue your studies of the state booze along the Kentucky Bourbon Trail. Take a bus tour (or even a cycling tour) and explore any of 16 distilleries in the Louisville area. And don't leave town (via the newly named Louisville Muhammad Ali International Airport), visit the Ali Center, a cultural institution dedicated to the greatest boxer in history, native son Mohammed Ali.

Cinco de Mayo (um, May 5) is known worldwide as one big margarita-fueled party. But no place celebrates it quite like the Mexican city of Puebla, where the holiday began on May 5, 1862, when the Mexican army defeated the French in The Battle of Puebla. Each May, more than 100,000 revellers come to see the battle reenactment and join the enormous parade. The procession snakes through the baroque city center (a UNESCO World Heritage Site) with mariachis, dance troupes and full-on firework displays. And let’s not forget the food. Lots and lots of food. Puebla’s signature creation is none other than mole poblano—the beloved blend of chilies, fruits, nuts, spices and chocolate. It pairs dreamily with chicken or beef, and is served in abundance throughout the day's celebrations. Try Chef Liz Galicia’s ultra-traditional take at the ever-popular El Mural de los Poblanos — or Angel Vázquez’ heretical (read: chocolate-free) spin at Augurio.

May's a sweet spot for this cool Carolinan city, with temperatures hovering above 20 degrees — ideal for the alfresco activities that fill the calendar. Check out the Leaf Festival (May 12-15), five days of African, Latin, Appalachian and Cajun music. And though the extra zen may feel superfluous in this blissful lakeside setting, head to the Healing Arts tents for yoga, sound healing and meditation. Then hit the food trucks for tempeh wraps, mate tea, and homemade gelato. For a more traditionally southern experience outdoors, head to Biltmore Estate, the largest privately-owned home in the U.S., where acres of spring flowers await if you take the self-guided Biltmore Blooms tour (through May 26). While you're there, hit the immersive Vanderbilt House Party exhibition (through May 27). If you prefer the Electronic Age to the Gilded Age, check out the Moogseum, an homage to the revolutionary inventor of the Moog synthesizer. You should also tour the Moog Factory to learn more about this music world icon and longtime Ashevillian. In fact, May 23 is locally known as Bob Moog Day — and this year would have been his 88th birthday.

Follow your nose to this secret valley in the Atlas — about six hours' drive from Marrakesh — and you'll wind up in Kalaat M’Gouna, where the sweet scent of fresh blooms permeates the air for three days during the Rose Festival (May 9-17). The city is also alive with Berber singing, dancing, and sword-fighting displays, plus the all-important Rose Queen coronation. Between events, consider taking a camel trek to the nearby village of Merzouga. Or indulge in a spot of canyoneering in the Martian landscape of the Todra Gorge.

Creatives, pack your bags for the Bay Area, where May is custom-designed for you: Oakland Art Month runs throughout May with a packed program of dance, visual arts and cinema. Then there's the Bay Area Book Festival in Berkeley (May 7-8), where the shortlist of luminaries includes Kim Stanley Robinson, Rebecca Solnit, Obi Kaufmann and Jokha Alharti among many others. Next up is CAAMFest (May 12-22), the nation's largest showcase for Asian and Asian-American films.

Ready to book a trip? Check out our deals on hotels and resorts around the world or visit our blog for more travel inspiration.